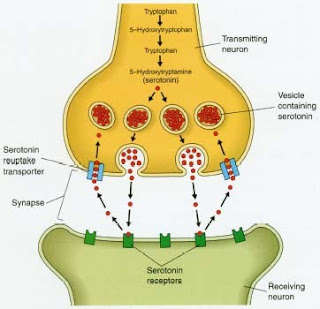 The diagram at right shows the general process of neuron-to-neuron signaling by neurotransmitters - chemical signaling agents produced by neurons, released by neurons, acting on neurons, and degraded by or in the vicinity of neurons.  This general scheme is true for the "catecholamines" (norepinephrine, dopamine, serotonin) and GABA.  Acetylcholine differs in that the molecule is first split into acetyl and choline halves before before taken up by the transmitting neuron.

This brings us to the subject of "Good Neurotransmitters Gone Bad..." 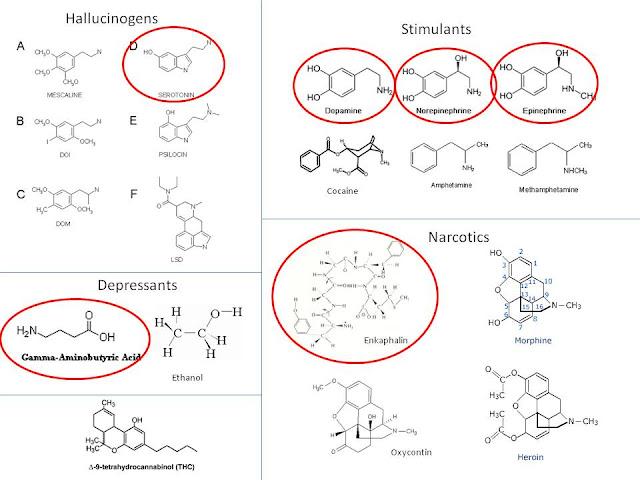 Note also that with the Narcotics, we introduce another neurotransmitter - enkephalin - which is present mostly in the spinal cord (but also in brain) to modulate the sensation of pain.

Then there's that lonely little THC molecule down in the lower left.  Tetrahydrocannabinol is the main psychoactive ingredient in marijuana.  For years it was thought to act either at the same receptors as narcotics, or by changing the neuron membrane.  The external membrane of any cell is a lipid (wax or oil).  "Floating" in the lipid are the proteins which give a cell its shape, and in neurons, the proteins which serve as ion channels, receptors and transporters.  The long "tail" on THC indicates that it *can* dissolve in lipids and have an effect by changing how easily the proteins move around in the lipid.  However, for the last 20 years we've known that there are specific receptors that respond specifically to the "cannabinoid" drugs.  Fifteen years ago the first "endogenous" or naturally occurring cannabinoid-like chemicals were identified in the brain, and about 10 years ago we discovered what those chemicals do.  We know that THC and the cannabinoids have the potential to affect *all* of the other neurotransmitters, because the natural chemicals can change how much neurotransmitter is released on a moment-by-moment basis.

So, the secret to *why* abused drugs have an effect, is that they look like the normal brain chemicals.  The issue of *how* they have an effect depends on what the normal role of the neurotransmitter is:  Norepinephrine is involved in attention => amphetamine is a stimulant; Dopamine is involved in risk/reward circuits => cocaine produces an extreme pleasurable "rush"; Serotonin is involved in sleep, dreaming and modulating sensory information => LSD causes hallucinations; GABA is the main inhibitor in the brain => ethanol relaxes and eventually depresses neuron activity; enkaphalin modulates pain = > heroin reduces pain to the point of producing euphoria.  There are many more drugs that could be mentioned, but most fall into these main categories, and the common feature is interference with natural neurotransmitter function.

Next up, two Weekend Special posts, then back to the Guide with "What's the Code" on Monday, May 2.  Until next time, beware of imitation neurotransmitters - because they might just be a good drug gone bad.
Posted by Speaker to Lab Animals at 4:55 PM 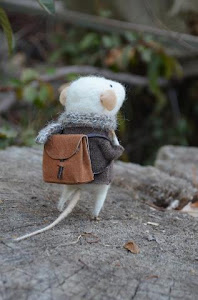